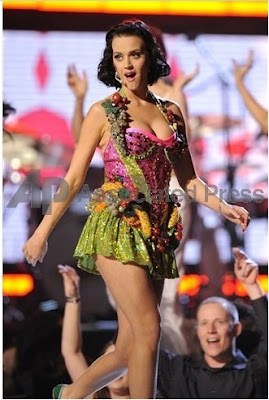 So I’m not a huge fan of awards shows. I sometimes watch the pre shows to see what everyone’s wearing, but that’s usually it.

For whatever reason I found myself watching the Grammy’s while Rock of Love Tour Bus was on commercial. Yes, I love trashy TV- so what?
I was a little disappointed in Katy Perry. I think she’s super cute and her songs are catchy enough. Her performance last night though, was as flat as her shoes.
Her voice sounded not too good, but sadder than that was the fact that she was wearing some pretty boring shoes.
I guess I just feel like if you’re a performer you should wear killer shoes. Maybe I’m spoiled with girls like Gwen who run around on stage, give a great performance, AND wear killer heels!
Anyway, my point was just that I was pretty bummed to see these (YAWN) boring shoes with the otherwise glitzy and over the top stage/costumes. 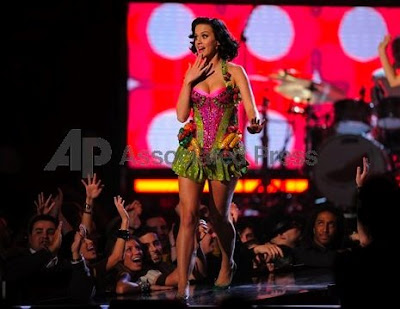